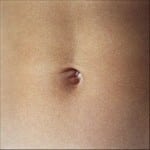 Transumbilical incisions are made on the upper-inside edge of your belly button. From there, empty, rolled-up implants are moved up to the breasts and inflated once they’ve been positioned. This approach is the newest of the four breast augmentation incision types.

The primary benefit of the transumbilical incision is the obvious one: the scar is hidden in the navel, so you can’t see it. The procedure itself also generally takes only 30 to 45 minutes–a plus because it means less time spent under anesthesia–and since this approach is less invasive than the other three, TUBA incision patients also tend to recover more quickly than periareolar, inframammary, and transaxillary incision patients.

That said, there are a number of negatives involved with transumbilical incisions. For one, the surgeon has to control the procedure from the belly button area–far away from the breasts–which makes it difficult to position the implants. Furthermore, the implants cannot be filled until after they’ve been inserted. Many plastic surgeons argue that these two facts make it much more difficult to achieve natural-looking results with the TUBA incision. Another disadvantage is that, like the transaxillary scar, the TUBA scar cannot be reopened for revision surgery later on; if your breasts end up needing additional work, you’ll end up with more scars.

I hope this series of posts on the four breast implant incision options available to breast augmentation patients has been helpful to you. More than anything, I wanted to make clear with these posts that every single incision type has its advantages and disadvantages. At the end of the day, what’s really important is that you come into the process as informed as possible, and that you and your plastic surgeon work together to decide what’s best for you.