If you’re thinking of nose reshaping surgery, also known as rhinoplasty, having a general understanding and reasonable expectations prior to surgery is important. In general, if you’re unhappy with a bump on the top of the nose, the tip of the nose or the nostril size, you may be a candidate for rhinoplasty.

And depending on what your concerns are, a rhinoplasty using the open or closed technique is in your future. The main difference between an open or closed rhinoplasty is placement of the incision. With the open technique, an incision is made across the columella which is the skin separating the nostrils from each other. This incision allows the plastic surgeon to “open” the skin envelope of the nose and address the bump on the top of the nose as well as the tip of the nose. Depending on whether you think the tip of your nose is too pointy, too round or bulbous or too boxy, the open technique will give your surgeon the needed access to correct these aesthetic concerns. 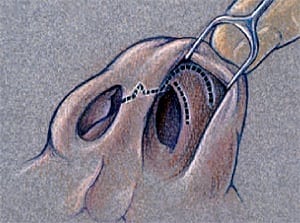 Comparison of the incisions required for an open vs closed rhinoplasty

As mentioned above, the columella is the skin in between the nostrils, and the incision used for the open technique of rhinoplasty. By comparison, the incisions inside the nostril, as seen in the photo, can be used for the closed technique. Patients that are only concerned about a bump on the top of the nose are excellent candidates for a closed rhinoplasty using those incisions inside of the nose. While many patients would prefer a more hidden scar inside the nostril, not everyone is a candidate for this approach, especially if they need more work than just the bump on top. That being said, the incision for the open technique, while potentially more visible, is quite invisible. Check out the pre and postop photo of the patient below that received an incision across the columella for the open technique to treat a bump on the nose and a boxy tip. This incision is already relatively hidden by 2 weeks! 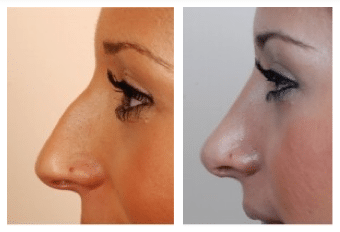