Nurse in NJ under quarantine for Ebola

A nurse returning from Sierra Leone has been quarantined in a New Jersey hospital. The governors of New York and New Jersey issued an edict at the end of last week requiring quarantine for anyone in recent contact with Ebola-stricken patients. Apparently she felt very dehumanized in the way she was treated in the Newark airport after her arrival. Before making any snap judgements about the nurse’s assessment of how she was treated, read her personal account published here. And then feel free to judge! 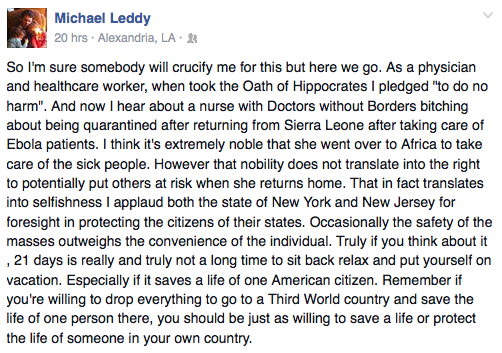 To paraphrase her account, she was made to wait upon entering the country for approximately 7 hours until she was transferred to a NJ hospital. She said that while she did not have a fever upon landing, she is going into quarantine anyway, essentially having her rights imposed upon. At this time, she still has no symptoms but it can take up to 21 days for symptoms to appear. In fact, it took about 10 days before Dr. Craig Spencer started to show symptoms after he returned from West Africa to New York after treating Ebola patients. He too is currently in quarantine, but at a NY hospital.

Aside from complaining about being quarantined while showing no symptoms, she is concerned that her treatment upon returning to the US may dissuade other health care workers from going to West Africa to help. While I don’t agree with her rant online – I thought it sounded selfish – I understand that she may have felt “put upon” at the airport after a long flight and I can understand the inconvenience of a quarantine. But can she really not see the bigger picture here? I don’t understand how someone who dealt with widespread death and disorganization in the world’s fight against Ebola could be so surprised by the governors’ reaction to this disease and the ensuing disorganization in trying to determine what to do with her after she arrived.

Maybe there is no good medical reason to quarantine someone until they are symptomatic but health policy and public policy has shifted and for understandable reasons. The nurses in Dallas were allowed to roam free and then became sick. The public wanted more reassurance. The pendulum shifted and policy now requires more Draconian measures. We’ll eventually find a middle ground in policy, but for now, the comfort of the masses outweighs the inconvenience of the few.

She’s made quite a ruckus by voicing her opinion in an essay on the Dallas News website. She better hope that she doesn’t come down with Ebola for two reasons. One, obviously she doesn’t want the disease. But secondly, in the court of public opinion, just think how it will appear if she complained about being quarantined while asymptomatic and then ultimately does contract Ebola? Governor’s Christie and Cuomo, and the public, won’t seem so hysterical after all!