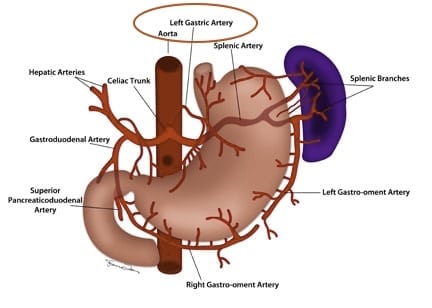 In a fascinating alternative for treating obesity, doctors in Dayton, Ohio have started studying the ability to initiate massive weight loss by blocking the blood supply to one part of the stomach. The left gastric artery, one of several blood vessels to the stomach, provides oxygen-rich blood to specific cells in the stomach that produce Ghrelin (pronounced gre-lin). Ghrelin is a hormone that affects your sensation of feeling full.

How does embolization lead to massive weight loss?

The idea is that by blocking this one blood vessel, less Ghrelin will be produced while maintaining blood supply to the rest of the stomach – a vital organ! Just like doctors currently block, or embolize, a blood vessel by injecting sterile small beads into a blood vessel to stop a bleeding artery or to clot off a ballooning blood vessel (aneurysm), embolization can also block the left gastric artery. And in turn, this reduces Ghrelin production.

The only other study in humans to determine if blocking the production of Ghrelin through embolization was conducted in the Georgian Republic (former Soviet Union). According to the Press Release from the doctors in Dayton, the 2013 study out of Georgia lead to five patients losing an average of 45 pounds in six months. A Harvard University study also noticed that patients having their left gastric artery blocked through embolization for non-weight loss reasons (like a bleeding stomach ulcer), lost 8% of their body weight on average.

The study by the Dayton physicians will conclude in September 2015 and will collect data on safety and efficacy for those patients who are morbidly obese (defined as having a BMI greater than 40). Qualified patients are between the ages of 22 and 65, in relatively good health and under 400 pounds.

Depending on how effective this procedure is, there may be more patients losing weight and searching our body contouring procedures to remove their excess skin. Time will tell.