I always get a kick out of patients bringing in celebrity photos and saying, “make me look like this!” Typically they want a nose like Princess Kate or a booty like Kim Kardashian. 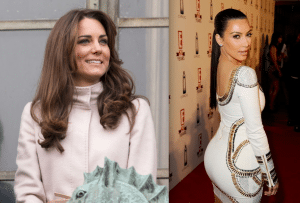 While there’s nothing wrong with clarifying to your plastic surgeon in very explicit terms what you want, those expectations may not be reasonable. For example, Kate Middleton’s nose looks great on her but maybe you don’t have the bone structure or cartilage framework to have the exact same nose, even after surgical alteration. More importantly, even if we could replicate her nose exactly on you, who’s to say her nose looks good on you?! Maybe it wouldn’t “fit” your face.

If you wanna be bootylicious like Kim Kardashian (I’m only using the commonly accepted contraction for a large booty – I’m not necessarily agreeing that her booty is delicious!), then you need enough fat on your body to be removed by liposuction and then injected into the buttocks. Or you can use an implant but I’ve heard of far fewer complications using fat injections vs an implant that could become infected, shift or push out through the incision.

But sometimes, patients don’t bring in celebrity photos… they bring in a recent photo of themselves that shocked and disappointed them. So much so that they re-evaluate their entire worldview as it pertains to cosmetic procedures. What I’m referring to is when a patient attended a party or wedding recently, had their picture taken and then they saw their photos afterwards, they notice that from somewhere out of the blue, they have wrinkles that weren’t there previously!

Whereas they would’ve never considered cosmetic surgery and thought that was only for “other people,” they start to realize that there’s nothing wrong with undergoing surgical or non-surgical procedures that allow you to retain your confidence and zest for life. So don’t be so quick to judge celebrities and others for fighting aging. One day you may find yourself going to a plastic surgeon with your own set of celebrity photos!