A couple of weeks ago when the American College of Cardiology and American Heart Association (ACC/AHA) came out with their 2013 Guidelines for who should and should not be on statin therapy to lower their bad cholesterol levels, I was surprised – surprised by recommendations of widespread expansion of statin use. The new guidelines recommended what amounts to one-third of American adults being placed on cholesterol-lowering statins. To me, this smacked of industry influence because it was so obvious that one particular industry would benefit greatly from these recommendations. Maybe I was being paranoid. So I decided to do a little research. 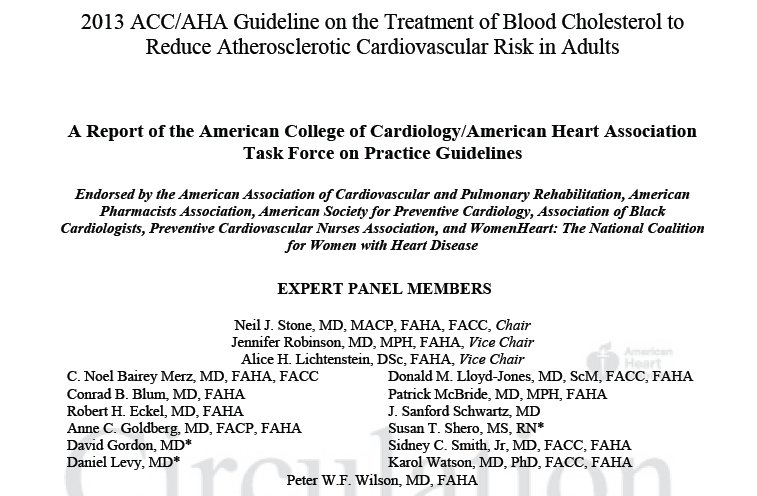 Performing clinical trials and studies to determine which patients benefit from specific treatments is an expensive process. The need to fund a study drives clinical investigators to seek dollars from various organizations like the American Heart Association but also from medical industries, in particular pharmaceutical companies. For this reason, I wanted to see if the authors of this study had received funding in the past from companies that made statin drugs. Here’s what I found. The three major statin drugs that are in use today are Lipitor, made by Pfizer; Zocor, made by Merck & Co; and Crestor, made by AstraZeneca. Currently, Lipitor and Zocor can also be purchased as generics.The generic version of Lipitor, atorvastatin, is made by Watson, Ranbaxy and Dr. Reddy Pharmaceuticals. The generic version of Zocor, simvastatin, is made by Ranbaxy, Teva, Ivax (a division of Teva) and Dr. Reddy pharmaceuticals. Only Crestor, made by AstraZeneca is still under patent protection.

My feeling was that if the doctors that wrote these guidelines had received funding from these companies in the past – companies that would receive billions of dollars in new prescriptions for statins based on these guidelines – the medical community and the public should know of these possible conflicts of interest. I didn’t have to go far to see which doctors were consultants or who had received research funding or honoraria from the companies above. The actual guidelines released by the ACC/AHA attached an appendix to their paper that listed the authors and any disclosures that would be pertinent. This list of relationships with the pharmaceutical industry is referred to as a Relationship With Industry (RWI). As you can see in the reformatted tables below, disclosures were initially submitted in 2008 and then resubmitted again in 2013 due to the length of time to compile and release these guidelines and assumption of the process by the ACC/AHA.

As you can see in this Relationship With Industry (RWI) table, many of the doctors have received funding from AstraZeneca, Merck & Co and Pfizer, in addition to other pharmaceutical companies. Seven of the 15 committee members disclosed receiving funding from at least one of these companies during the period the guidelines were compiled, 2008-2013. However, these tables don’t appear to tell the whole story. By searching each panel member on the internet with the keyword ‘grants’ or the keyword of the three main pharmaceutical companies – AstraZeneca, Merck & Co and Pfizer – I found other relationships with industry that weren’t identified in the tables above. To be clear, the tables only include relationships that were ongoing between 2008 and 2013. So these additional relationships that I found may have existed before 2008.

The chair of the guidelines committee, Dr. Neil J. Stone, declared no relevant relationships from 2008 to 2013 but this source from The Heart/Medscape states,

This brings the total number of panel members that wrote the guidelines and received funding from these companies to 8 of 15. But there’s more. Dr. Donald M. Lloyd-Jones received funding from AstraZeneca based on this source from Northwestern University. That’s 9 of 15. According to Lipids Online, “Dr. [Sidney C.] Smith has served as a consultant for or on the speakers’ bureaus of Bayer Corp., Eli Lilly and Co., GlaxoSmithKline Pharmaceuticals, Pfizer Labs, and sanofi-aventis; and has served as a member of the Data Safety Monitoring Board of AstraZeneca Pharmaceuticals.” And lastly, on Medscape, Dr. Patrick McBride lists, as part of the WATCH case study series, the following disclosures:

That brings the total to 11 of 15 panel members that received funding from the industry that would gain the most from their recommendations. The contributors that appeared to have no relevant disclosures from both the RWI Table above and from research on the internet are Dr. Alice H. Lichtenstein, Dr. Conrad Blum, Dr. David Gordon and Dr. Daniel Levy. While they were counted as part of the 15 panel members, Drs. Gordon and Levy served in an administrative capacity for the National Heart, Lung and Blood Institute (NHLBI) and listed no relevant relationships with industry. When viewed from this perspective, you can argue that a full 11 of 13 non-administrative panel members had a relationship with an industry that stands to make billions more on these guidelines favoring statin use.