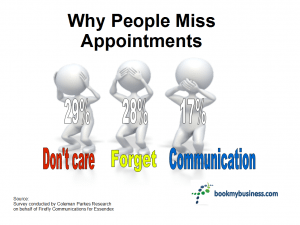 While the problem is not rampant, it is frustrating when it happens. I’m talking about someone that calls to schedule an appointment with their doctor or book a reservation at a restaurant and then doesn’t show up, or cancels last minute. Depending on who is reading this, you may think this is obvious courtesy or you may think I’m writing much ado about nothing.

I’ve never quite understood how a person can call and make a reservation or appointment and think nothing of just not showing up. Isn’t it totally natural to inform the business that you’re going to be late or give them notice that you won’t be coming at all? As the graphic above suggests, most people who miss appointments, do so because they forgot or don’t care. It’s hard to scold someone that just doesn’t care. There’s a problem in basic decency in that situation but even if you just forgot, a simple call to apologize will go a long way. Especially if you ever expect to return to that establishment.

Again, this hasn’t happened often in my practice, but as you may surmise from the topic of this post, it’s happened once too often. We do attempt to minimize no-shows or late cancellations by requiring a credit card to hold an appointment, and most patients comply. But at least twice that I can remember, we were given a fake credit card number so when they didn’t show up, we weren’t able to charge our customary no-show or late canceling fee of $50. Giving a fake credit card number is another level of discourteousness!

But if we require this courtesy of our patients, doctors have a responsibility to not be late in seeing their patients. I feel strongly about this – I don’t want my patients waiting because I wouldn’t want the doctor to make me wait either. There will always be exceptions and a doctor may run late if a patient is more complicated than the one after, but even then, there’s nothing wrong with the doctor apologizing for being late either. All of this can be summed up by the golden rule!

As a patient or customer, how would you handle being late or unable to make a scheduled appointment?