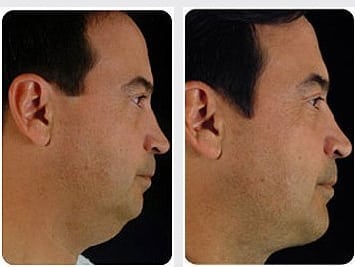 The American Society of Plastic Surgeons (ASPS) just released new statistics based on last year’s plastic surgery numbers—and chin augmentations are skyrocketing in front of other procedures as the fastest growing trend.

According to the ASPS, there were 20,680 chin implants performed in 2011. Viewed side by side with one of the more popular cosmetic procedures, such as breast augmentation (more than 300,000 performed last year), that number seems rather small. However, that 20,680 represents a 71 percent increase in the number of chin augmentations performed in 2011 vs. how many were performed in 2010—a huge leap up.

I’ve seen speculation that one of the reasons that chin implants are becoming so popular is the advent of video chatting on phones and computers. The theory here is that people are spending more time looking at their own face reflected back to them—and perhaps even seeing themselves from new angles as a result—and they don’t necessarily like what they see.

This may be true, but it all ties into the traditional (but still very applicable) reason that has always brought people to seek out a chin augmentation: it’s a procedure that strengthens your jawline and provides your profile with greater balance and symmetry. People tend to react more favorably to symmetrical features, and strong jaws are associated with confidence and success; I would argue that these are the core reasons why chin augmentations are becoming so popular, even if video chatting is what has served as the initial inspiration.

Trend or not, a chin augmentation—even a very subtle one—can make an enormous difference in how looking in the mirror (or into the camera on your iPhone) makes you feel. If you’re interested in exploring how a chin implant could improve your facial profile, consider coming in to our offices here in San Francisco to discuss your options. If you decide a chin augmentation is right for you, we’ll customize the size and shape of your implant to ensure that it complements your particular face shape and features.