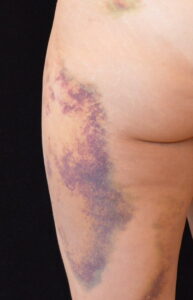 Bruising after liposuction to the thigh.

The thing that’s most confusing about bruising after surgery is that aside from bruising at the site of your surgery, you can also bruise far away from where the operation was. The reason for this is anatomical. Below the skin and fat, there is an anatomical plane. In other words, there is a very narrow “space” between the skin/fat and underlying muscle. This space is called a plane. And if you have any bleeding after surgery, which is totally normal in small amounts, that blood can track from the location of the operation, along an anatomical plane. This results in bruising both near and far from where the operation took place.

So don’t be anxious is you had liposuction on your outer thighs and the brushing extends towards the knees even if you didn’t have liposuction of the knee area. Also, don’t be anxious about bruising in the neck after facial surgery. Again, the blood has drifted downward along the anatomical plane.

The best way to know if bruising is a sign of something worse is pretty straightforward – pain. Obviously some pain is normal after surgery but if your pain is so excruciating that even the pain meds don’t help, you might have what’s called a hematoma. A hematoma is a collection or pool of blood under the tissues of the body that causes a stretching of the skin. This stretch leads to pain. Again, an appropriate about of blood will also cause pain but this kind of pain is usually controlled with pain medicine.

If you’ve had a facelift or thigh liposuction or any operation that took place on both sides of the body (both breasts, both arms, etc), then your pain should be pretty even on both sides. If one side is bigger and more painful, as in there’s a lot of blood on one side more than the other, then bruising in this case can be a sign of a hematoma which may require surgical intervention.

In summary, bruising is normal and even normal for it to track to far flung areas of the body. But when it’s really painful and unilateral (i.e. it’s only on one side even though you had surgery on both sides), that’s when you should call your doctor. If he/she is a good doctor, they’ll want to know if you really have a problem and if you don’t, they’ll be relieved and get a better night’s sleep all for knowing you’re actually doing fine!