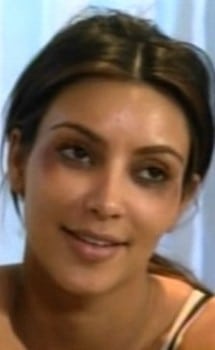 Here’s Kim Kardashian with black eyes looking far from her usual glamorous self – after she bruises from to Botox injections. Courtesy of Examiner.com

When I administer Botox/Xeomin, Juvederm, Belotero or Radiesse, I always inspect the patient’s skin to see if there are any visible blood vessels under the skin. In patients with lighter skin, it’s easier to see a vein. Tanned individuals – it’s harder to discern.

Regardless, I do my best to inspect the skin, knowing that it’s easier to see blood vessels in the forehead and avoid them but harder to see, and much easier to bruise around the eyes. With fillers, the sheer thickness of fillers on the market seem to bruise more easily due to the product themselves and the fact that larger needles are sometimes required to inject them.

Many doctors, like me, also give patients ice packs after a Botox or filler injection to minimize bruising but the point is that bruising is always a possibility. There will always be small, unseen blood vessels under the skin that are susceptible to bruising. So while you doctor is trying their best to minimize bruising, it’s no reason to label them as a good or bad doctor on that one trait alone.